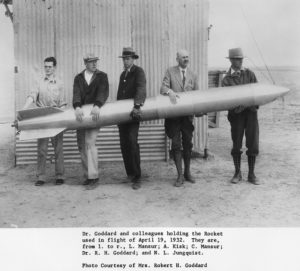 “I imagined how wonderful it would be to make some device which had even the possibility of ascending to Mars, and how it would look on a small scale, if sent up from the meadow at my feet.”

One day when he was just 17, Robert Goddard was up in a cherry tree pruning branches when he had the first thought about creating a rocket. Throughout his life, he celebrated October 19th as his Anniversary Day. “I was a different boy when I descended the tree from when I ascended. Existence at last seemed very purposive.”

Robert is known today as the father of modern rocketry. During his life, however, he was not always recognized as such and was often ridiculed in the press. Robert, though, never gave up. If ridiculed by the press or accidentally 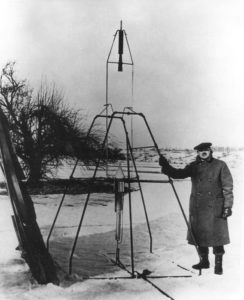 filling up the physics building at the Worcester Polytechnic Institute with smoke after misfiring a rocket in the basement, he persevered. He dedicated  his life studying physics, engineering, and aerodynamics. He followed his dream of space travel, designing, and constructing rockets, even though he knew that he would never be able to go himself (the first human in space wasn’t until 1961).

On March 16, 1926 Robert successfully launched the first liquid fueled rocket. He set up in a field belonging to his Aunt Effie in Auburn, MA, just adjacent to a cabbage patch. The rocket, named Nell, flew 41 feet high and landed 184 feet away in just 2.5 seconds.

Aim for the Stars!

“It has often proved true that the dream of yesterday is the hope of today and the reality of tomorrow.”
Robert Goddard, On Taking Things for Granted, 1904.

Make a Model of Robert Goddard and his rocket.